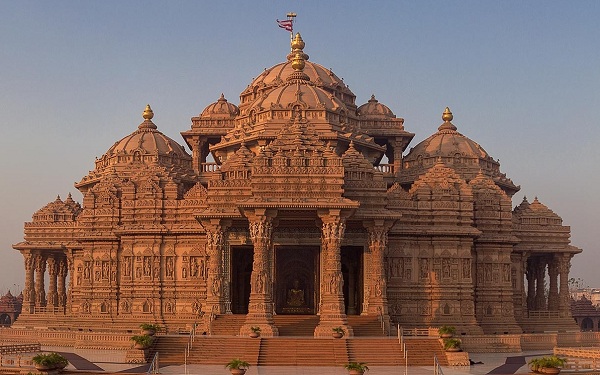 Delhi is home to some of India’s most famous temples and shrines. From the famous Akshardham Temple in the heart of the city to smaller, lesser-known temples, the city has something for everyone. Here are the top 10 best Delhi temples that are must-visit destinations for anyone visiting the capital city. First, the Akshardham Temple, built in 2005 is a grand Hindu temple that is considered one of the most important religious sites in India.

For this reason, the temple is also very much in India as compared to other countries, and it shows how much religious faith remains in India.

About the religious faith of India, it can be gauged from the fact that holy books like the Ramayana and the Mahabharata are famous all over the world, and people follow their lives as these texts not only in India but also abroad.

The Lotus Temple is one of the tourist temples in Delhi and was opened in 1986. Since then, this temple has been praised not only in Delhi but all over India, and people are keen to visit it once if they go out on a Delhi tour.

This temple is a living example of architecture in which 27 marble petals have been engraved and are arranged in groups of three with nine sides.

This temple has been built for worship and to behold the beauty here, but you cannot do any kind of ritual here.

This is one of the most popular temples located in South Delhi, where the Kalkaji metro station is a good way to reach it. You can reach this temple a short distance from there.

I’m going to add another magnificent Delhi temple in south Delhi to the list. It’s known as the Chhatarpur temple, but it’s also known as the Shri Aadya Katyayani Shakti Peetham, and it’s dedicated to Goddess Katyayani (a manifestation of Goddess Durga).

This famous temple, located in South Delhi, is spread over 60 acres, in which there are 20 temples, including small and large ones, built in both North Indian and South Indian architectural styles.

Sant Shiromani Baba Nagpal was responsible for the design and construction of this marble temple.

This temple is at a distance of 4 kilometres from Qutub Minar, where you can easily go by bus, train, or even your vehicle.

Kalkaji Temple, also known as Manokamna Siddha Peetha (the place where all desires are fulfilled), is one of the oldest and most famous temples in Delhi, behind which a lot of mythological mystery is also hidden.

There is also a sentence that says that during the Mahabharata, the Pandavas built five temples, one of which is also known as the Kalkaji Temple, and it is also said that Goddess Durga killed many demons by taking the incarnation of Kalika; after that, she remained on earth in the form of a stone.

Now, how much truth there is in all these things cannot be told, but this temple is very old, and people come here in large numbers for darshan and to fulfil their expectations.

To reach the Kalkaji Mandir on the Delhi Metro, go between Nehru Place and Okhla.

This temple of Pawan Putra Hanuman is located in the south area of Delhi, which is very popular in Delhi, and devotees come here in large numbers to visit and ask for their vows.

This famous Hanuman temple in Delhi is considered one of the holy temples of Hindus, where the name of Shri Ram is always chanted, and this process has been going on since 1964.

If you want to reach the famous Hanuman temple in Delhi, it is situated in Connaught Place in Delhi, where you can reach it easily.

Akshardham Temple is one of the most popular temples in Delhi and is located in Delhi. Akshardham metro station is the best source to reach here, and through this, you can easily reach here. This temple is dedicated to Swaminarayan.

Every year, lakhs of tourists come here to see the beauty of this temple, not only from the country but also from abroad. Whenever people come to Delhi, they definitely come to see this temple.

Swaminarayan Akshardham was inaugurated in 2005. With intricate carvings, the Akshardham temple alone is 141 feet high, 316 feet wide, and 356 feet tall.

This is known as one of the famous Delhi temples, known as the Vaishnav temple of Lord Krishna and Radharani, and is situated on Rd. Sant Nagar, east of Kailash. This is the best ISKCON temple in Delhi. It was established in 1998.

This is the world-famous temple of Radha Krishna, located in Delhi, where lakhs of devotees come and ask for their vows, which they fulfil there. If you also want to visit this temple and want to go, then we have given the address below, with the help of which you will be able to easily reach this temple, and you will be able to see the beauty of this Delhi-famous temple there as well as pray to God.

If you are looking for a famous temple in Delhi, NCR, this Laxminarayan Temple, also known as Birla Mandir, is one of the most visited famous temples in Delhi.

Baldeo Das Birla and his sons founded this well-known temple in Delhi NCR in 1933. This famous Shiva temple near Delhi is also known as the temple of Krishna, Buddha, and Geeta Bhawan.

Every year, here, lakhs of devotees visit this temple, giving their reverence and fulfilling it there. If you also want to visit this temple and want to reach it, then we have given its address below, with the help of which you can get there. but will easily reach

This is one of the oldest temples in Delhi, which is located very close to the Red Fort. This temple is famous as the Jain temple, which was established in 1658 AD.

Shri Digambar Jain Lal Mandir, or Chandni Chowk, was built during the time of Emperor Shah Jahan, and the main idol of the temple is that of Lord Mahavira.

The temple also serves as an avian veterinary hospital, popularly known as the Jain Bird Hospital.

If you want to reach this temple and want to see it, the address has always been given below so that you can easily reach the temple and also see God.

Do you want to know when Delhi’s well-known temple will reopen in 2023? Jagannath Mandir, New Delhi, is known as one of the most famous temples in Delhi and is located 1 kilometre away from INA Metro Station.

This temple is unique in that anyone of any religion is welcome to visit; there is no discrimination based on caste, creed, gender, or community.

This is the famous Durgabari Mandir temple in Delhi, which is located in Delhi for Durga Puja and worship and is considered to be one of the most popular temples in Delhi. This Durga temple is completely dedicated to Bengali people who live outside the house and are in Delhi. But this does not mean that no one else can go here; people of all religions can go and worship Durga.

This famous Durgabari Mandir temple in Delhi is run by a society that is involved in religious, charitable, and cultural activities throughout the year.

It is located in the holy place of Hindu people, which is located in Delhi, so if you want to visit this temple and worship Durga Mata here, then you can easily reach it here; we have not given its address. You can easily get here by following that.

We hope that the above information on Delhi’s famous temples in 2023 has piqued your interest and that you will be able to learn about the most popular temples in Delhi that you must visit at least once. Stay with us in this manner; together, you must bookmark to receive immediate notification.

How many famous temples are there in Delhi?

What is the famous temple in Delhi?

Which is the largest temple in Delhi?

What is the oldest temple in Delhi?

Which day is Akshardham closed?

Why Akshardham temple is famous?